Sign in  |  Create a Rediffmail account
Rediff.com  » Getahead » The IGCSE education: how can it help your child?

The IGCSE education: how can it help your child? 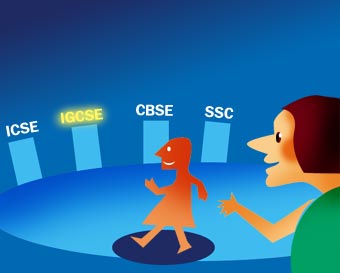 he International General Certificate of Secondary Education (IGCSE) is a globally recognised qualification, taken at the Class 10 level, similar to the Class 10 examinations of the CBSE and ICSE or the middle years Programme of the IB.

IGCSE, formed in 1988, is a comprehensive two-year programme, spread over Class 9 and 10, and leads to the final examinations offered every year in May and November.

A student who has passed IGCSE is eligible for any +2 level qualification, like Class 12 CBSE/ ICSE or any international pre-university programme, like the IB Diploma, Advanced Placement Diploma (US), and A/AS Level & AICE (UK).

How does the IGCSE compare to other programmes like CBSE, ICSE or the Middle Years Programme of the IB?

Like other modern programmes, IGCSE offers a wider range of subjects and encourages high academic standards through a practical approach to teaching and learning. Assessment is not limited to conventional written papers and they consist of a variety of tests e.g. oral and listening tests.

The assessment is aimed at a wide ability range of students, with an eight-point grading scale, from A+ to G, with A+ being the highest.

IGCSE is a balanced curriculum and a flexible course of study.

Most subjects offer a choice between core curriculum and extended curriculum.

This gives students of all ability levels the freedom to choose subjects that are right for them and, thereby, the opportunity to score good grades.

The core curriculum is an overview of the subject and is suitable for students who are expected to achieve grades C to G.

The extended curriculum is, sort of, a specialisation in that subject. It is more challenging and designed for students who are expected to achieve grades A+ to C.

While the syllabi and curricula of both IB MYP and IGCSE have an international outlook, IGCSE appears to be slightly better, in that it is tailored for a more multi-cultural and more multi-lingual audience.

Does the IGCSE start only in Class 9? What about the primary years? Can a student do IGCSE after completing his/ her earlier schooling through a different board?

CIE has declared the launch of its new Cambridge International Primary Programme in June this year.

The introduction of this programme means students will be able to study the IGCSE from age five through age18.

What are the subjects in the IGCSE curriculum?

There are five Subject Groups in IGCSE with several subjects to choose from, in each group:

For each subject, the certificate merely indicates the grades scored, and not pass or fail.

What is the International Certificate of Education (ICE) that is awarded to some IGCSE students?

The ICE is more prestigious than the standard IGCSE.

Instead of the five papers needed to obtain the IGCSE, if a student attempts and passes seven or more papers, s/he is awarded the ICE.

The seven subjects must be as follows:

Why should I select IGCSE for my child?

1. IGCSE is one of the most sought-after and recognised qualifications in the world. It develops and encourages vital educational skills, including oral skills, investigative skills, problem solving, team work, recall of knowledge, and initiative.

2. The IGCSE programme has worldwide status and credibility. In India, the course is delivered in over 130 schools with the number expected to touch 600 by 2008. It is recognised by the Association of Indian Universities (AIU) as being at par with CBSE, ICSE, etc.

Worldwide, it is delivered in schools in over 140 countries and is recognised by colleges and universities everywhere, more so in the UK and other Commonwealth countries.

3. The IGCSE curriculum is balanced and lends an international perspective to studies. It also takes account of differing abilities of students.

4. IGCSE students can take advantage of the Cambridge Checkpoint, a diagnostic service comprising of standardised tests, that pin-points a student's strengths and weaknesses in key curriculum areas.

What are Edexcel and CIE?

It was formed in 1996 by the merger of two well-respected bodies, BTEC (the Business & Technology Education Council), and ULEAC (the University of London Examinations and Assessment Council).

In 2003, Edexcel merged with the education giant, Pearson PLC, to set up a new company called Edexcel Limited, which is 75% owned by Pearson and 25% by the Edexcel Foundation.

CIE is the international division of University of Cambridge Local Examinations Syndicate (UCLES).

UCLES is a department of the University of Cambridge, which was formed in the year 1207, and is one of the oldest and most reputed universities in the world.

What is a Cambridge International Centre? What is an Edexcel Centre or a London Examinations Centre?

Schools that are accredited to Edexcel or CIE for the conduct of the IGCSE programme are known as Edexcel Centres or Cambridge International Centres.

From parents' or students' perspective, there is little difference between the two.

Some schools are accredited to Edexcel and some to CIE. For example, DPS International in Delhi is an Edexcel IGCSE centre, while the Pathways World School in Gurgaon is a CIE IGCSE centre.

Then there are some like Calcutta International School in Kolkata and British School in Delhi, which are centres of both Edexcel and CIE.

More than the assessment body, parents need to think about which school is better for their child.

Some prominent IGCSE schools in India are:

Rohit Tikmany is the Chief Operating Officer at SML Group, which conducts several schools and colleges in Mumbai. He is the organiser of India's first Flash Mob and writes on education, technology, education technology and technology education.