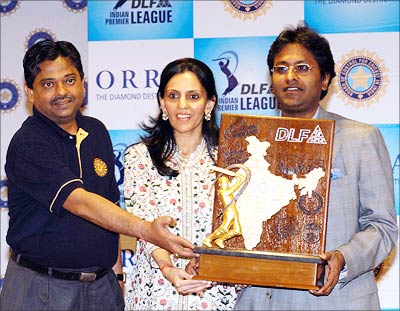 The diamond-studded Indian Premier League winner's trophy, encrusted with rubies and yellow and blue sapphires, was unveiled in Mumbai on Monday by IPL chairman and commissioner Lalit Modi.

"It's a handcrafted and very expensive rotating trophy, the value of which I will not reveal. It has been crafted by Orra's design team," said Modi.

The Antwerp-based RosyBlue Group, owners of the Orra diamond brand, which set up a new diamond production facility in Mumbai last year with an investment of Rs 35 crore, also designed the trophy the BCCI presented Anil Kumble on his feat of 600 Test wickets.

"The winning team will get a replica of this trophy," he clarified.

The trophy, which has a player in gold leafing holding a bat adjacent to a map of the country with the names of the teams engraved on it and symbolised by eight rubies, was crafted by 14 artisans, said chief designer Mona Mehta